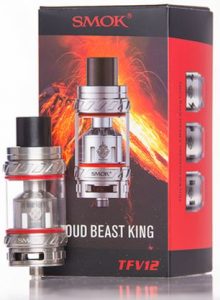 This tank measures in at 28mm at its widest point, and is 70mm tall. This makes it one of, if not, the largest tank in all vaping production … ever. It is made of stainless steel, and has a glass tank that can hold upwards of 6ml of your favorite e-liquid. The tank also comes packaged with the usual Smok goodies; some coils to get you started, an extra glass, some extra o-rings, and one drip 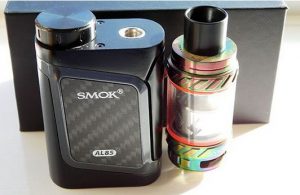 tip adapter. If the tank’s size doesn’t make it king, then the coils just might.

Same as the TFV8 Cloud Beast, the TFV12 holds to Smok’s engine theme with its design which is a slightly strange cross between classy and rugged. The device boasts a deep knurling that brings form and function to any part of the tank that will require a good grip. The tank still uses the same rotary fill design that Smok has used since the TFV4. This always has, and still works well.  The TFV12 still holds the same 6mls of juice despite its upgrade in size. Smok claims that the air slots are 30% bigger since the birth of the TFV8, which is easily to believe. Because there is so much airflow, the draw doesn’t quite feel much different when you have it fully open versus when you have it open only halfway. That said, you are able to dial in exactly the airflow you wish, depending on your needs.

The Smok Cloud Beast King when purchased comes with 3 different coils. There’s the V12-T12, the V12-X4, and as you most likely already knew, the V12-Q4. The T12 has a specially built twelve coil design, while the Q4 and X4 feature their own unique quad coil designs. According to the manufacturer Smok, the T12 is all about clouds, while the Q4 brings about a smooth taste. The X4 gives a mixture of the two, bringing both clouds and flavor into one piece.

After looking at each coil, and then Smok’s wattage recommendations, I decided to get a little frisky and try the new 12 coil, the T12. I typically don’t vape any higher than 60 watts normally, but since I had this Beast King in hand, I decided to shoot for the stars and proceeded to max out my RX200. At a full 200 watts, the T12 coil was able to handle the heat no problem at all. The 12 coils are utilized well, while the cotton soaks up the juice perfectly, leaving no chance for dry hits. I can say for sure that if you’re looking to make a cool cloud video or practice your vaping tricks, rocking this coil with wattage at these levels will definitely do

I’ve gotta give credit to Smok and their descriptions of the two other coils that are included with the tank. Trying to save on some battery life one day, I just had to try the other coils. They’ve much lower wattage recommendations, and they are also described as having better flavor potential. When it comes to the X4 and the Q4, I have to say I’ve been using the X4 the most. I’ve got to say it really does bring out more flavor than the T12. I think that the mixture of fewer coils, along with more power going to each coil allows the juice to be vaporized effectively.

The construction of this tank is quite strong and sturdy. That said, Smok’s claim of the glass being explosion-proof is a bit of a stretch. Somehow, I managed to crack one of the glass pieces while doing my cleaning routine. If this package didn’t come with an extra glass, I for sure would have had a slightly bigger problem on my hands

The coils that the Cloud Beast uses are just hands down amazing. They run at extremely high wattages, they wick the juice effectively, and (depending of course on y 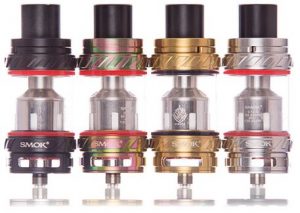 our vaping habits) might not use as much juice as you might think they would. Even though these coils work extremely well, they still have that little problem of tasting kinda weird when you first use them. Once you get past that taste, these coils absolutely work great

With its new 12 coil design, its huge airflow, and massive size, the Smok TFV12 Cloud Beast King is appropriately named. It can produce thick clouds for fun, yet still has the options to give pretty good flavor. If you think you would enjoy having the biggest and most powerful tanks of late, then you have to pick one up. This tank definitely won’t disappoint.

Check out Ultimate Vape Deals for some unbelievable deals on e-liquids and vape hardware.